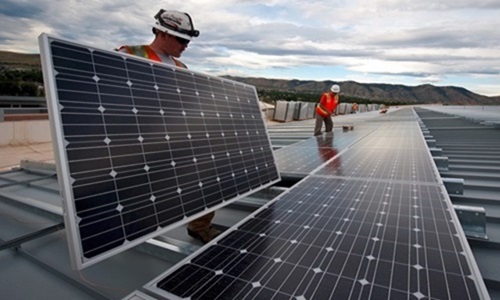 ITI Limited, a manufacturer of telecommunications equipment, has recently announced its plan to invest nearly Rs 150 crore. The investment can help increase the solar panel manufacturing capacity to 90 MW, in next fiscal year, from its current solar panel capacity of 18 MW. Its solar panel manufacturing facility is located at Naini, Utter Pradesh. The company also plans to raise Rs 1,600cr through FPO (Follow on public offer). It has deployed 15 MW solar power plant project for the SECI (Solar Energy Corporation of India). Several turnkey contracts for telecom towers, Bharatnet, and UP police headquarters have also been executed. According to statement made by R M Agrawal, ITI Limited’s Chairman and Managing Director, the company is aiming to gain advantage from high level of demands arising from corporate sectors, commercial establishments, and state governments for its solar products, most prominently in the rooftop segment. Mr. Agrawal stated that the company’s Rs 150 Cr investment sum for capacity expansion is expected to come from the budget that was allocated to the DoT (Department of telecommunications). Furthermore, the company expects to receive at least Rs 500cr from the Government in the next fiscal year to meet the increasing capex (capital expenditure) requirements. He further added that FOP funds will be used for other general purposes, including partial repayment of loans and funding the working capital. However, for the capital expenditure, the company must await the release of funding from the ministry. In September 2019, India’s cumulatively solar installations amounted to 33.8 GW, out of which, rooftop solar installation was more than 4 GW. The company relies on capacities offered by discoms across numerous states in order to effectively supply its panel and establish solar rooftop plant projects on a turnkey basis, as well as other projects to be taken up by the national solar mission. ITI Ltd is also focusing on adding LED solutions in its line of products, including LED streetlights, solar lantern, etc. Source credit: https://www.moneycontrol.com/news/business/telecom-gear-maker-iti-to-invest-rs-150cr-to-boost-solar-panel-capacity-4860051.html