Home
Energy and power
Trump administration to give approval for the largest U.S. solar farm 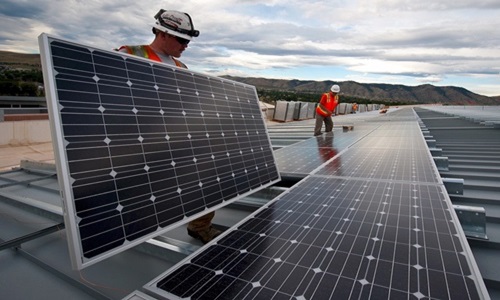 U.S. federal officials have reportedly unveiled plans to approve an expansive solar farm that would also feature energy storage capabilities in the desert right outside Las Vegas, Nevada. This decision would make way for project that would cost $1 billion and would provide electricity to residents of Nevada, which will be served by NV Energy, a company owned by billionaire Warren Buffett. With around 690 megawatts throughout 7,100 acres, the facility will be generating more electricity than the largest solar farm that is currently operating in the U.S., a 579-megawatt facility located in Southern California. The component of energy storage, four-hour lithium ion batteries of at least 380 megawatts, will also be one of the biggest facilities that can store solar power for use in dark. The project, named Gemini, would be on federal lands and would require sign off from the Interior Department.  President Trump had declined the mainstream climate science and criticized renewable energy. Even though solar power is now the cheapest source of electricity throughout the U.S., he called solar power to be expensive. Gemini project might be the third solar farm operating on public lands, being approved by federal officials, joining the Palen 500-megawatt project in Riverside County, California and the Sweetwater 80-megawatt project in Wyoming. Tim Smith, District Manager for southern Nevada, BLM, reportedly stated that the Gemini project will represent a remarkable increase in the capacity of renewable energy for Nevada as well as the West. Smith further stated that the bureau is actively supporting the America First Energy Plan developed by the Department of the Interior and its strategy to support energy development on public lands. The Trump administration had also issued various approvals for Sierra Madre and Chokecherry wind project, which is being developed by Philip Anschutz in Wyoming. NV Energy would pay an average of approximately $38.44 per megawatt-hour which is for the combined output of the batteries and solar panels under a 25-year contract at the Gemini project. Doug Cannon, president and chief executive, NV Energy, reportedly stated that adding two other solar and storage projects with the Gemini project allows them to extend the benefits of renewable energy especially when the sun is not shining. The project is being developed by Arevia Power and Quinbrook Infrastructure Partners. It is expected to be operational by December 1, 2023.  The project would be built alongside Interstate 15, which is about 30 miles northeast of Las Vegas. Source credit: https://www.latimes.com/environment/story/2020-01-01/trump-to-approve-largest-solar-farm-las-vegas